Working with young children in Early Years over the last few years, I hadn’t felt much need to warn of the pitfalls of copying, copyright, and plagiarism.  I myself make every effort to use CC images and  properly credit my sources for this blog…but I must say I haven’t really broached the topic with my 4 year olds.

For one, we don’t do tests, so no hands over papers required.  Even so, when we do an assessment, often a recorded discussion with specific questions about our topic of study, I am often torn about whether we do it alone, or in a group.  In groups or pairs, the students will often say the same things.  One student will copy or repeat what the other–often stronger student– says, and they I am left wondering: would they have given a different answer–a better one, a not so great one…would they have said anything at all? (Staring blankly happens a lot, too.) Maybe by copying their peer, they are in fact, learning from that peer. 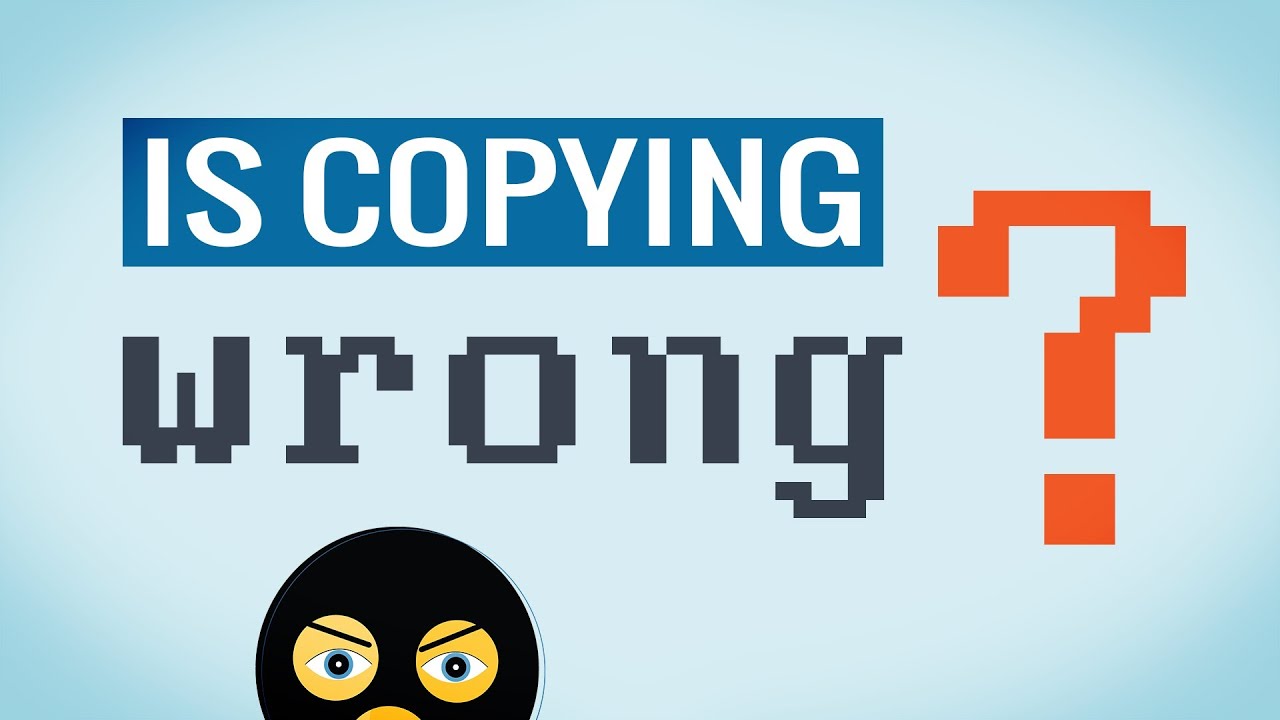 Image from youtube video, Is copying wrong? By Copy Me (Incidentally, in searching for a good image, I stumbled upon a whole series of videos by these same creators…lots of great content that they don’t mind us copying.)

Kirby Ferguson, the ‘creator’ (getting hazy on what this actually means now) of the video series says, “We can’t introduce anything new until we are fluent in the language of our domain…and (we build this fluency) by emulation…”

Infants’ first facial expressions are mirror images of those around them– and parents delight in this copying. The creative role play room in my class is always a buzzing hive of students re-enacting exciting scenes from the latest Pirates of Carribean (speaking of piracy), but it is also a place where students act out something as mundane as searching for car keys and lamenting how late they are going to be.  (Punctuality is definitely not a concern for young children, as I well know…this is an imitation of the language and stress of a regularly tardy parent.) Clearly this imitating, copying and role play is pretty important in “building a foundation of knowledge and understanding” before they can get around to creating something new.

My students learning about piracy…err….pirates

Unfortunately, copyright and intellectual property laws don’t really seem to care.  It seems US law regards ideas as property–distinct and separate, and don’t take into account how creative ideas actually work…they are an ever evolving combination of all that has come before.

Ironically, the US copyright and patent acts were introduced to “incentivise creative thinking”:

Copyright act: “An act for the encouragement of learning”

Screen shot of US Patent Act, from the film, Everything is a Remix

It is rather sad how their main objectives now seem to be about making rights exclusive and seeking profit–or at least that’s how “Patent Trolls,”(money hungry lawyers who take advantage of overly broad software patents) see it.

Patent Trolls, By EFF-Graphics (Own work) [CC BY 3.0 us], via Wikimedia Commons

Okay, I understand with our current economic model it is very hard to make money as an inventor of original products/ideas. With copying…there are much lower research and development costs, so gains are higher…eventually resulting in low motivation to innovate and create. Intellectual Property laws kick in to balance things out.

Now there are new efforts to reform laws in an attempt to balance things out once again, and to reign in those Patent Trolls.  For those in the US, tweet @congress #fixpatents and you can send your representative a direct message.  Being relatively new to Twitter, I am slowly understanding its power more and more–not just a resource and network hub–it’s also a platform to push one’s political agenda.

All this thinking about copying is making me re-think my initial reaction to this creepy Scarlett Johansson robot.

My first thought:  If I were Scarlet Johansson, I would be completely mortified at the literal objectification of my person and feel entitled to sue.  Now I am re-considering.  If this creator weren’t so obsessed with Johansson and apparently not too worried about litigation, maybe this ‘innovation’ might not have come to fruition.  Who knows what others might create without so many constraints?  Apparently there could be hundreds of little you and me robots running around…The article goes on to mention how easy it is to make replica dolls: “The American Girl doll collection allows any parent to make a realistic-looking replica of their child.”

Don’t think I could handle a replica of this…